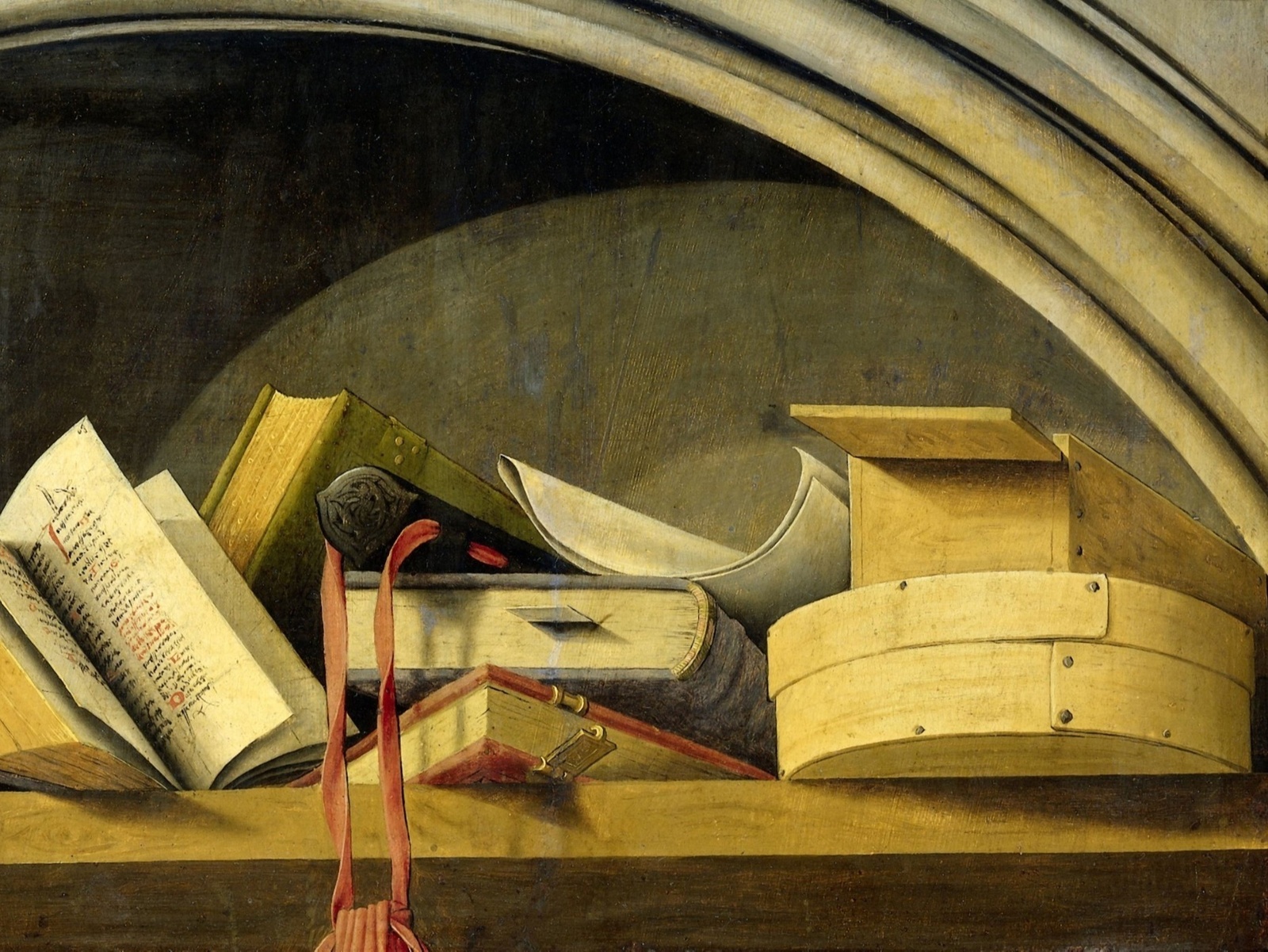 One such woman is Elen Langwith, who joined the Fraternity of St John the Baptist of Tailors and Linen-Armourers in the mid-1400s. We first meet her in "Ellen Langwith: Silkwoman of London":

In 1476 the Tailors’ Company of London spent two shillings on ‘a pike and a potell of wine for Mistress Ellen Langwith’. That same year, the Cutlers’ Company spent 8d. on a rabbit and a hen which they also sent to Ellen. Who was this woman who was being so assiduously courted by two city companies?

From the above extract it's clear that Ellen must be an important woman for both the Tailors and the Cutlers to bestow gifts on her. In fact she was a wealthy woman of the time, with links to both guilds through her two deceased husbands, the first a Cutler, and the second a Tailor. She appears not to have had any children, and so she had both fortune and land that might be bequeathed to the organisations seeking her friendship.

While she inherited from both husbands, Ellen had also amassed wealth through her own ventures. She operated very successfully in the silk trade under her own name, building a business where she sold to the royal household and trained her own apprentices.

According to Anne Sutton, the historian of the Mercers' Company:

Medieval London was the centre of the English silkwomens’ trade. Young girls came from all over England to be ‘maydens in Chepeside and Soper Lane that be prentees ... prentees which mercer wifes have

"Two Dozen and More Silkwomrn of Fifteenth-Century London", THE RICARDIAN, 2006

Silkwomen were female traders and craftsmen in a range of specialities, trading silk and fashioning items including ribbons, buttons, fastenings, decorations, veils, gloves and handkerchiefs. The breadth meant that there were crucial opportunities for a number of women during the medieval period. London was at this time a key trading point in Europe, allowing the city's tradesmen and craftsmen to specialise much more so than their provincial counterparts. We know nothing of Ellen's apprenticeship, but she was already a successful businesswoman when she married her first husband, Phillip Waltham, a Cutler.

By 1426 Ellen was widowed, but her deceased husband named her as the executor of his will, so confident was he in her abilities. Further, he left three female apprentices to her as their mistress (apprentices to married women were usually indentured to both man and wife.) The Latin word magistra (mistress) is used. This indicates that she is to continue their training.

Interestingly, Phillip left money for the new church bells at Beckenham, Kent. His family seem to have come from Ludgate not Beckenham, so perhaps it was Ellen who came from Beckenham to London to make her fortune.

By 1437, Ellen had remarried to tailor John Langwith. Langwith was a respected name within his craft and a Liveryman of the Fraternity of Tailors. He is unlikely to marry beneath him, and so we can assume that Ellen continued to be a successful silkwoman through the decade following her first husband's death.

The Merchant Taylors' Company records show that Langwith contributed to Company collections, including for the new kitchens at the Hall. (They still exist today, an excellent investment!) In 1444-5, Langwith was elected as Master of the Fraternity. During his Mastership, King Henry VI wed Mary of Anjou. There were many elaborate processions held that summer to celebrate the event and the Tailors' Fraternity played their part.

In recognition of John's Mastership, the Fraternity admitted Ellen into the Freedom free of charge as had become the custom since the early part of that century. Company records of 1507 refer to the duties of a 'man or woman of the craft'. Women were clearly able to operate within the trade independently of men.

Ellen's career as a silkwoman was also prospering, In 1439 she and five other London silkwomen bought silk from Venetian merchants for the huge price of £20. Over the next four years she or her husband bought three further fardels (bundles, parcels) of silk for large sums. The scale of these purchases make it likely that Ellen had a reliable network of suppliers and sub-contractors in London.

As John continued to grow his own fortunes and career through the Tailors' Fraternity, Ellen continued to take on young girl apprentices, making it likely that she herself was still involved personally in the production of silk goods. In 1454 she took on one Elizabeth Eland, from a small village in Lincolnshire. In 1465 she was named as one of the suppliers of silk "stuff" to the royal household for the coronation of Elizabeth Woodville, wife to King Edward IV. She was paid the considerable sum of £27 and 10 shillings for:

Certain stuff by hir of late delyvered unto the handes of Thomas Vaughan one of the squiers for our body to the use of our most dere and most entierly beloved wyf the Quene to and for hir thanes, sadyll and pylion

Thanes were banners. These and the "sadyll" (saddle), and "pylion" (pillion, the cushion behind the saddle) sold by Ellen show her status as a successful and prominent tradeswoman within London. She was not a regular supplier to the royal court, but the lavish celebrations for royal weddings required goods of the highest quality to be purchased far and wide.

John Langwith died on 18 Jul 1467 and named Ellen as his principal executor. In her own detailed will of February 1468, which appears to have acted much in the way of a forward contract, Ellen bequeathed the house west of St Mary Abchurch, which John had built for them around the time of their marriage, to the Tailors' Fraternity. In return, the Tailors were to keep her and John's anniversary (obit) in the church and give coals to the poor of the parish. This was a magnificent gift to the Company. After all charitable and expenses, the property produced a sizeable annual profit. The Company has only sold the property within living memory and so it continued to contribute significant profits through the subsequent centuries.

To ensure that the Tailors carried out her wishes Ellen added a clause, that if the Master and Wardens of the Tailors failed to carry out the conditions of her bequest, then the property would pass to the Cutlers' on the same terms. This cleverly ensured that both fraternities would take great care to fulfil her wishes. Now we can understand why the Tailors and the Cutlers fought for Ellen's attentions and bestowed such gifts on her in 1476!

The Cutlers continued to favour Ellen. From 1473 to her death she was invited to attend their annual Cony Feast, a mark of great respect and only open to members, their wives and very special guests. The gift from the Cutlers in 1476 of a rabbit and a hen may indicate that she was by this time too old to attend the feast.

Ellen drew up her final will in January 1481. It shows an equal devotion to both crafts; of the 12 men to hold candles around her body at the service, two were to be Cutlers and two Tailors. Moreover, on the procession to her burial she requested that two Cutlers and two Tailors also be present. Most of her bequests were to women.

Much of Ellen’s story remains hidden but it may reflect the strength of her personality and her skill as a silkwoman that we are able to paint any picture at all of her life in fifteenth-century London, for most artisan women make only fleeting appearances in the records.

While there is much that remains unknown of Ellen Langwith, her successful career as a London silkwoman and as one of the Company's earliest female Freemen show how women have always been important to the Company. Her bequest of the substantial Abchurch property was crucial to the Company's later wealth and prosperity.