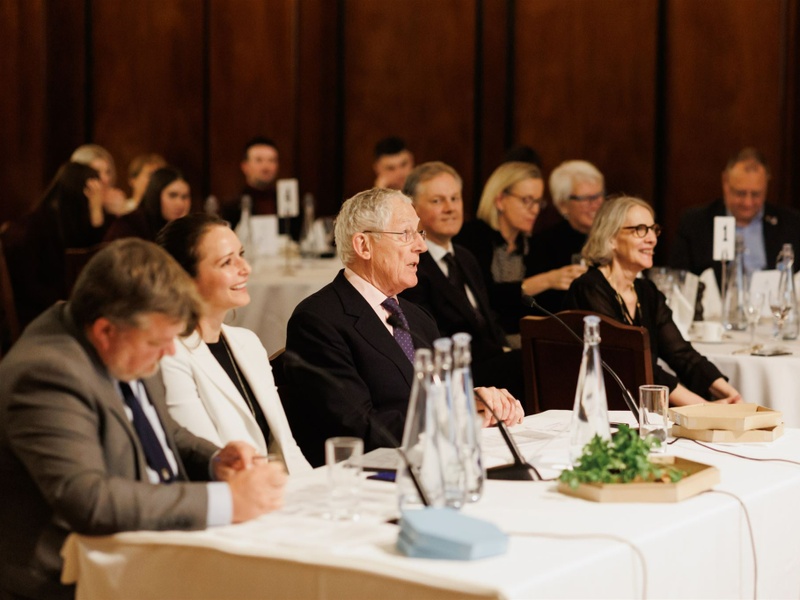 After two months of busy preparations – during which our mentors' competitive sides well and truly came out over the competition's process – it was at last Monday 22 November, the Merchant Taylors' Heat event for the Livery Academy Awards 2021/22 competition.

Flying in from the Walled City of Derry-Londonderry, Foyle College were first up to the stage. Mentored by Freemen Shane Mcdonald and Marcus-Alexander Neil, the team took to the stage to present their idea of Rubbish Reborn, a cutting-edge new low-carbon bin (sustainably made from willow, a fast-growing tree that can be sourced from the local Derry area), and which includes a barcode scanner to determine whether your item could be recycled and in which compartment of the bin to pop it into.

It's never easy to go first, harder still in front of an audience of over 100 near-strangers, but the team from Foyle did themselves and their school incredibly proud with their presentation that was informative, engaging and funny. Asking for a 'mere £500,000' investment, the team walked us through how recycling is frequently done incorrectly by many households across the UK, and as a result, completely ineffective, but their high-tech bin could tackle this problem head on; with more people confident about how to re-cycle, re-use and re-birth their rubbish, the planet would be much healthier. Further, through careful data capture, the team's bin would be able to help app users to make better, more sustainable choices over time.

Seeing a gap in their local area, the team's pitch included plans for gaining grants and support from local authorities and funding programmes to help them get off the ground. The judges later complimented the team on deciding not to exit once the company was turning a profit, but to continue to build up their company past the five-year mark. Despite some tough questions put to them – especially to marketing lead Sophia, – the team demonstrated their passion for their product as well as a real in-depth knowledge of what it could achieve; they left the stage to strong applause. 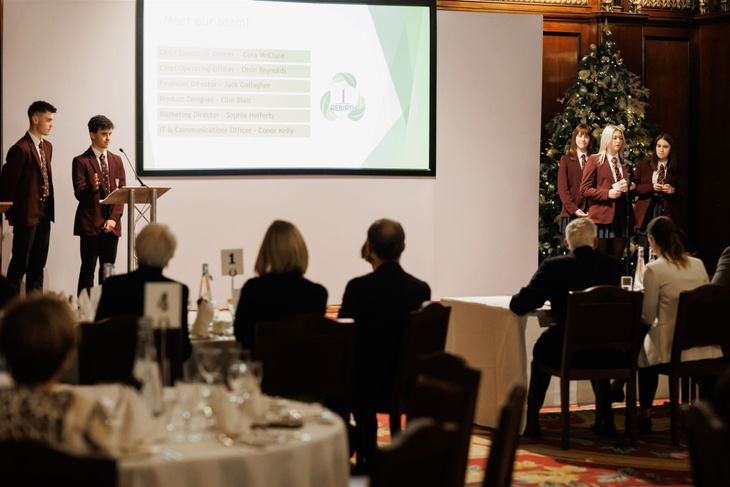 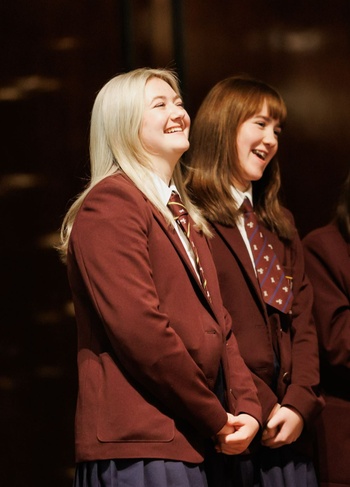 We at Foyle College would like to extend our sincere thanks to Merchant Taylors’ for involving us in Monday evening’s event. The pupils have benefitted enormously from the experience of developing a business strategy, working alongside two fantastic mentors and travelling to London to present in Merchant Taylors’ Hall. Thank you for affording this opportunity to our pupils; it really has created lifelong memories for them.

Marcus-Alexander and Shane, we hope the Foyle College team did you proud and a special word of thanks to you both for your enthusiastic, inspirational and motivational mentorship.

We really look forward to seeing you all next year again.

St Saviour's & St Olave's School came next to present Beauty Harvest. The all-girls school from Southwark had fielded the winning team in 2020, and this year, mentored by Liveryman Lucinda Orr and Freeman Jack Harvard Taylor, the team had come up with a make-your-own natural beauty products subscription service by growing your own herbs. Conceived by Product Designer Salina, the idea came from the need for a kinder beauty industry on the planet, and her own asthma, which prevented her from using certain cosmetics. Beauty Harvest aimed to develop kinder skincare with less harsh environmental impact. Through varying subscription levels, Beauty Harvest empowered wannabe gardeners to grow their own herbs to create skincare products with very limited space required. Aimed towards those in flats and living within built-up urban areas, customers would be sent the add-on products to create everything from solid perfumes to gentle masks and eyeshadows.

The team had made examples of the kits customers would receive, all of which can fit through the standard UK letterbox, and had even prepared some recipe examples for the judges!

Chair of Judges Jana Mackintosh praised the team for their level of presentation; the team delivered a remarkably confident and highly polished pitch. On the business side, Judge Nick Hewer had queries around the advertising revenue and marketing plans from the team. Finance Director Nilyana however won an ovation from the crowd for a thorough run-through of industry average PPC (pay per click) advertising and walked the judges once again through Beauty Harvest's marketing strategy. There were no further questions! 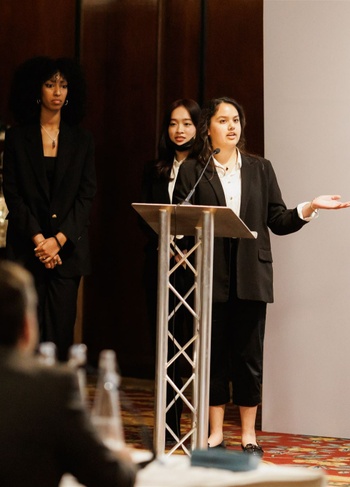 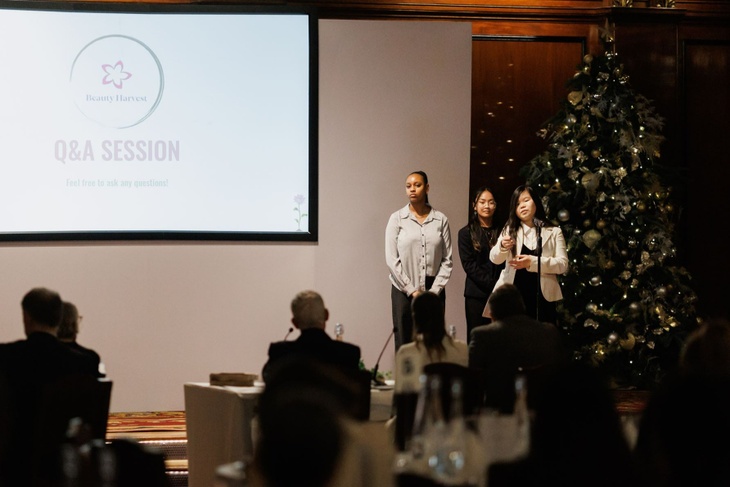 The final presentation was by Wallingford School. Mentored by Liverymen Jamie Longstaffe and Victoria Townsend, the team's professionalism and passion for their company, Carbon Conscious, was clear.

The judges were particularly keen on the gamification of the app, and the clear intent to make the product as user-friendly, slick and fun, utilising other market leaders as inspiration. The attention to detail, such as introducing viral elements gave this product a real chance of becoming a particularly hot product.

Judge Tim Vallings congratulated the team on their business research into competitors within the space, and on taking elements that were particularly popular within other apps and adopting them into their own framework to great success. After their quick-fire Q&A, the judges retired to deliberate, and the teams could relax!

It has been a pleasure to be involved for another year... It was a great competition and we at Wallingford learned a lot from the two presentations from Foyle College and St Saviour's & St Olave's. 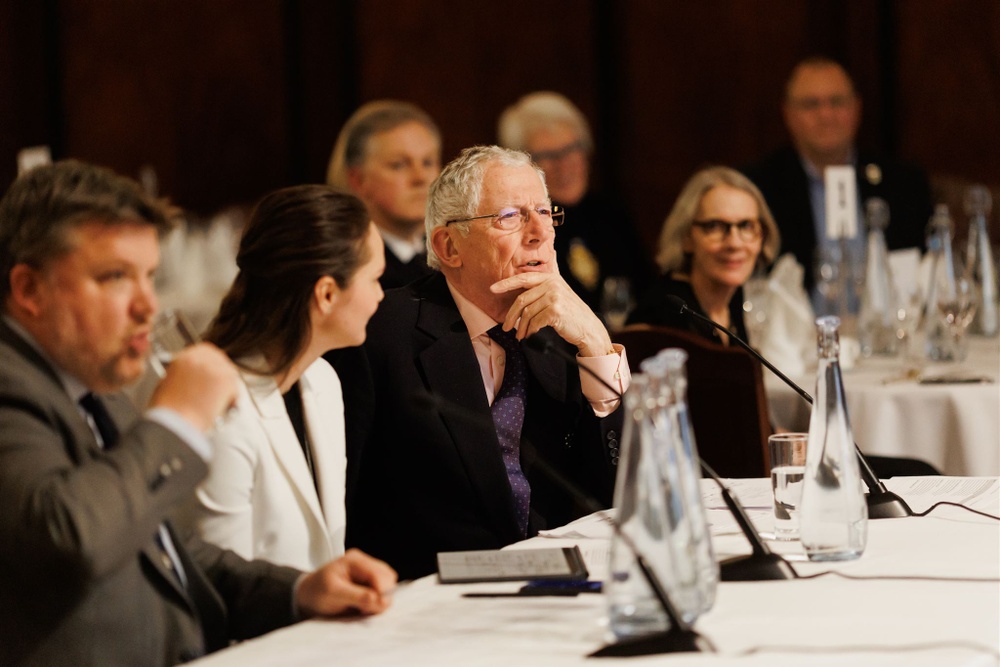 While awaiting the evening's winner announcement, the Clerk welcomed the winners of 2020 to the stage to remind the audience of their winning idea, which aimed to equip those in prison with garment-making and design skills to create better support systems for rehabilitation once released. The presentation at the time had been over last year's November lockdown, and so having the students (now in Year 13) at the Hall was a real pleasure. Several the the 2020 winners named the competition as their inspiration to explore the world of business further and even creating their own companies after university. We wish them every luck in the future.

Back to the 2021 competition, the judges were in and Chair of Judges Jana Mackintosh noted how despite not an easy decision to make, the decision had been a unanimous one. Congratulations went to Wallingford School and Carbon Conscious! The team will go up against the winning teams from the Grocers', Drapers' and Haberdashers' in a Grand Final in February 2022. There they will pitch to some of the biggest names in the City, including The Lord Mayor! 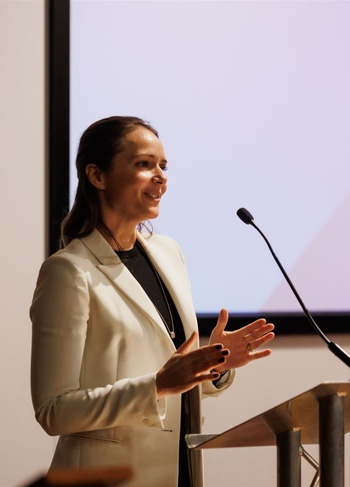 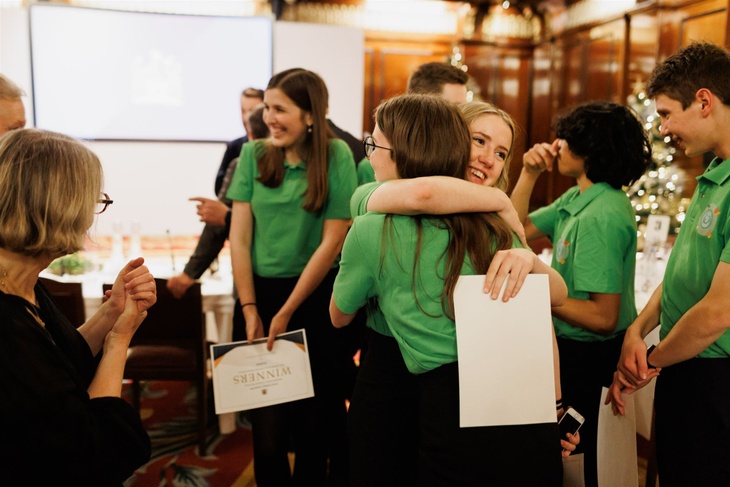