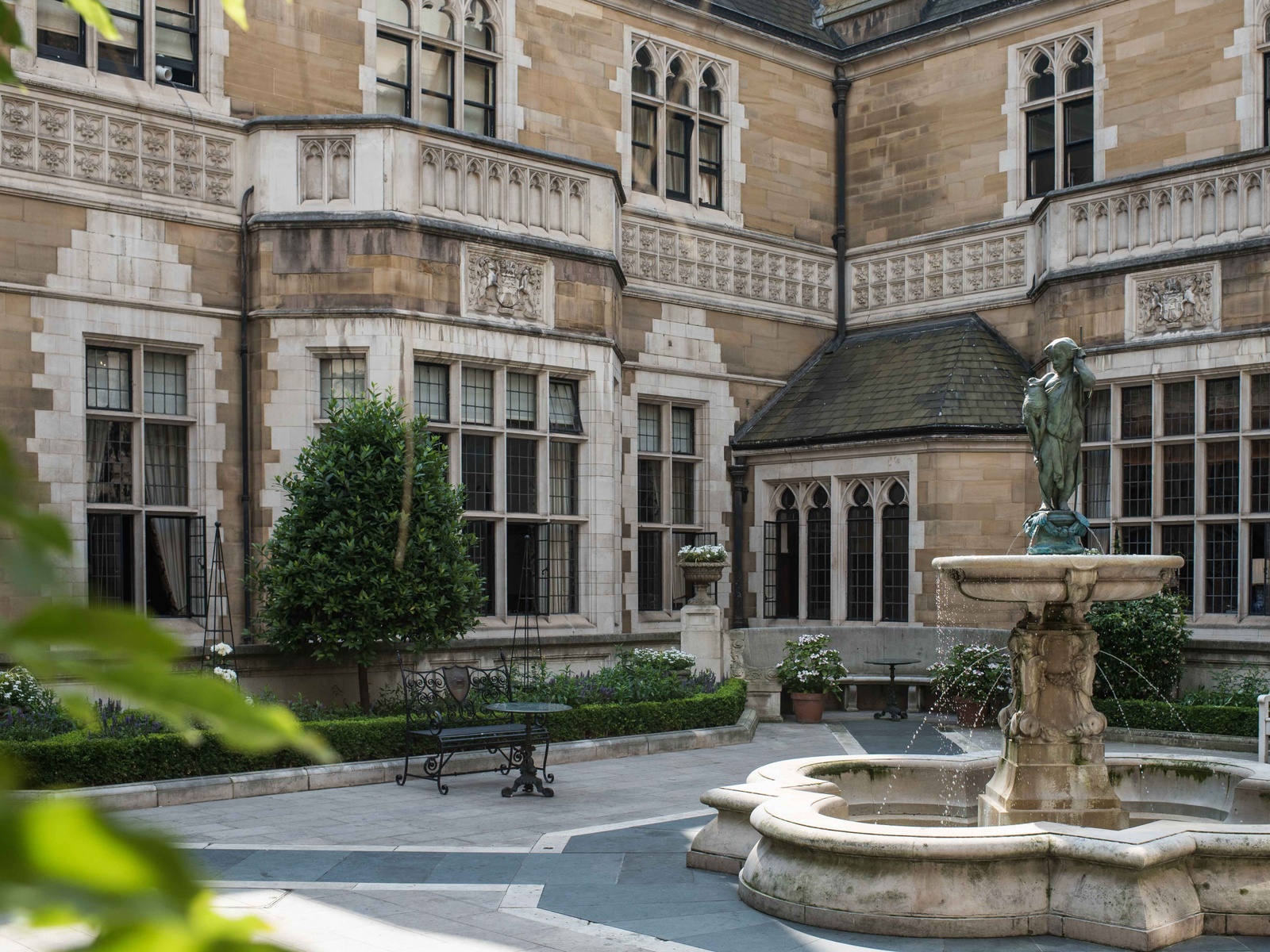 The Blitz and the Long Road to Rebuilding the Hall 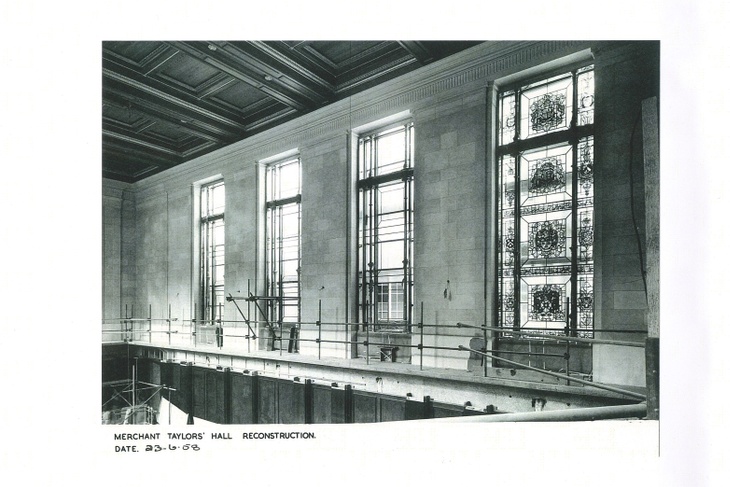 In the early hours of Tuesday 17 September 1940, a fire blazed at Merchant Taylors’ Hall. Struck by eight incendiary bombs, over half of the building was obliterated.

From 7 September, the Nazis had stepped up their bombing of the UK, targeting industrial areas and crucial transit routes in a bid to undermine the British war effort. Known as The Blitz, the year 1940-1941 saw more than 18,000 tons of bombs fall on London, much of it on the East End.

Incessant raids and heavy bombing near the Hall had already driven the Beadle and his wife to move to Windsor the week before. This left two porters, aged 17 and 18, on-site. The young men, noted in the Master and Wardens’ report of October 1940, were day-duty men who while “trained in the use of first-aid appliances, could not be looked on as a fire-fighting party.” On the night in question, ahead of another night's bombing, they took shelter in the Bank of New South Wales (now 29 Threadneedle Street).

On hearing that the Hall was hit, the porters braved the raid to secure and help a group of firefighters battle the blaze. The report from the Master and Wardens October 1940 meeting notes:

flames tore through the building’s wood panelling and timber structure. The Great Hall, the Grand Staircase, King’s Gallery, Parlour, both the East and West Entrances and the Beadle’s offices were destroyed.

As the fire-fighting party tried to douse the flames, the Muniment Room, which housed priceless records and objects came within inches of flooding. The vestibule carpet was rolled up and sandbags hastily deployed to create a dam which saved it from flooding by a matter of inches. 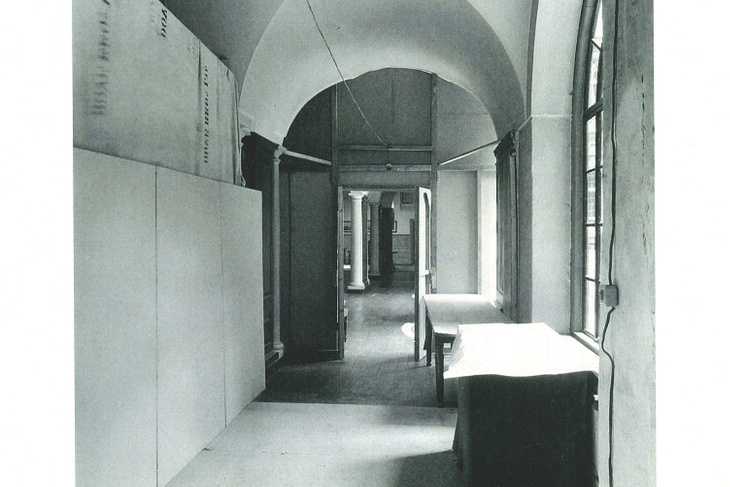 Reconstruction during the Second World War was all but impossible, and so the Hall remained until May 1945, when, following VE Day, the Company created a Reconstruction Committee. It quickly appointed architect John H Worthington OBE MBA FRIBA to direct the Hall’s restoration.

Worthington, based in Manchester, soon ran into issues regarding rebuilding licenses, not least the bureaucracy of the War Commission (the government body set up to pay compensation for war damage to land and buildings).

The discovery of dry rot through parts of the building caused delays and in 1948, Worthington wrote that steel and building licenses were still impossible to obtain.

By 1951, over a decade after the Hall was hit, progress was non-existent. Only the Parlour had been licensed for permanent reinstatement; the East Wing was in poor condition with further dry rot discovered; the Grand Staircase remained unbuilt –the Clerk at the time noted how access to the first floor was possible only by ladder– and the Great Hall was in particularly dire shape after ten years without a proper roof. 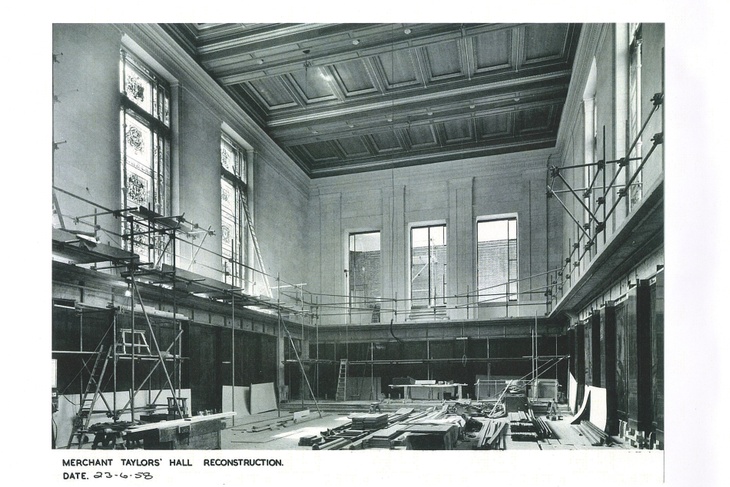 By 1952, Court members grumbled their dissatisfaction as other Livery Halls made much quicker progress. Worthington's base in Manchester and his workload were blamed. An unnamed Court member suggested abandoning the reconstruction plan, proposing instead to patch up the Hall to re-open as a luncheon club. Outrageous! The rest of Court declared this “pusillanimous and unfair to posterity… A City Company without a Hall is like a snail without a shell.” They decided instead to replace Worthington.

Professor Sir Albert Richardson took over as architect in December 1954. President of the Royal Academy, and already 74 years old, he responded immediately and enthusiastically at the opportunity. By summer 1955, sketches were made, which were exhibited at the following year's Royal Academy Summer Exhibition and works were speedily carried out in the subsequent years. 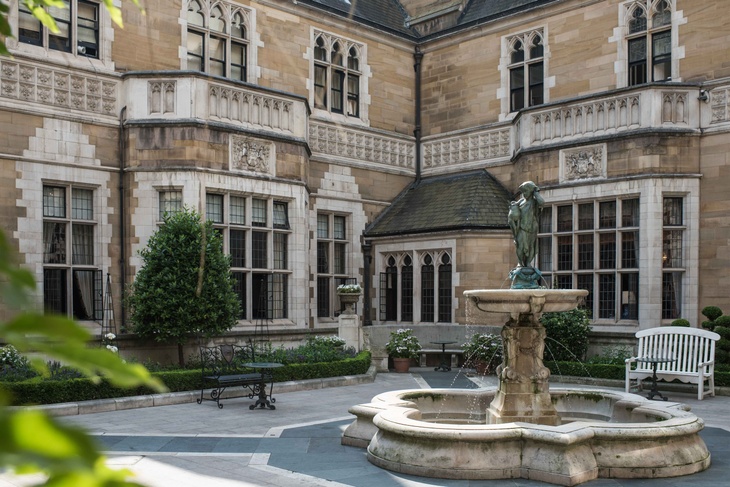 Today, repair work can be seen when in the Courtyard. Changes in the brickwork around windows show where flames ripped through the timber frames and where the lighter replacement stones have been introduced.

The Hall was formally opened on 19 March 1959 for a Livery Dinner.

In less than 300 years, Merchant Taylors’ Hall was twice burnt and destroyed. Although it had taken eighteen years to restore the Hall, by the beginning of 1960 the Company was able to come home and to meet together as a fraternity. Once again, they could apply their energies to supporting the causes of education of young people and the care of the elderly and infirm, as their forebears had done so notably for more than the previous six hundred years.

The History of The Merchant Taylors’ Company