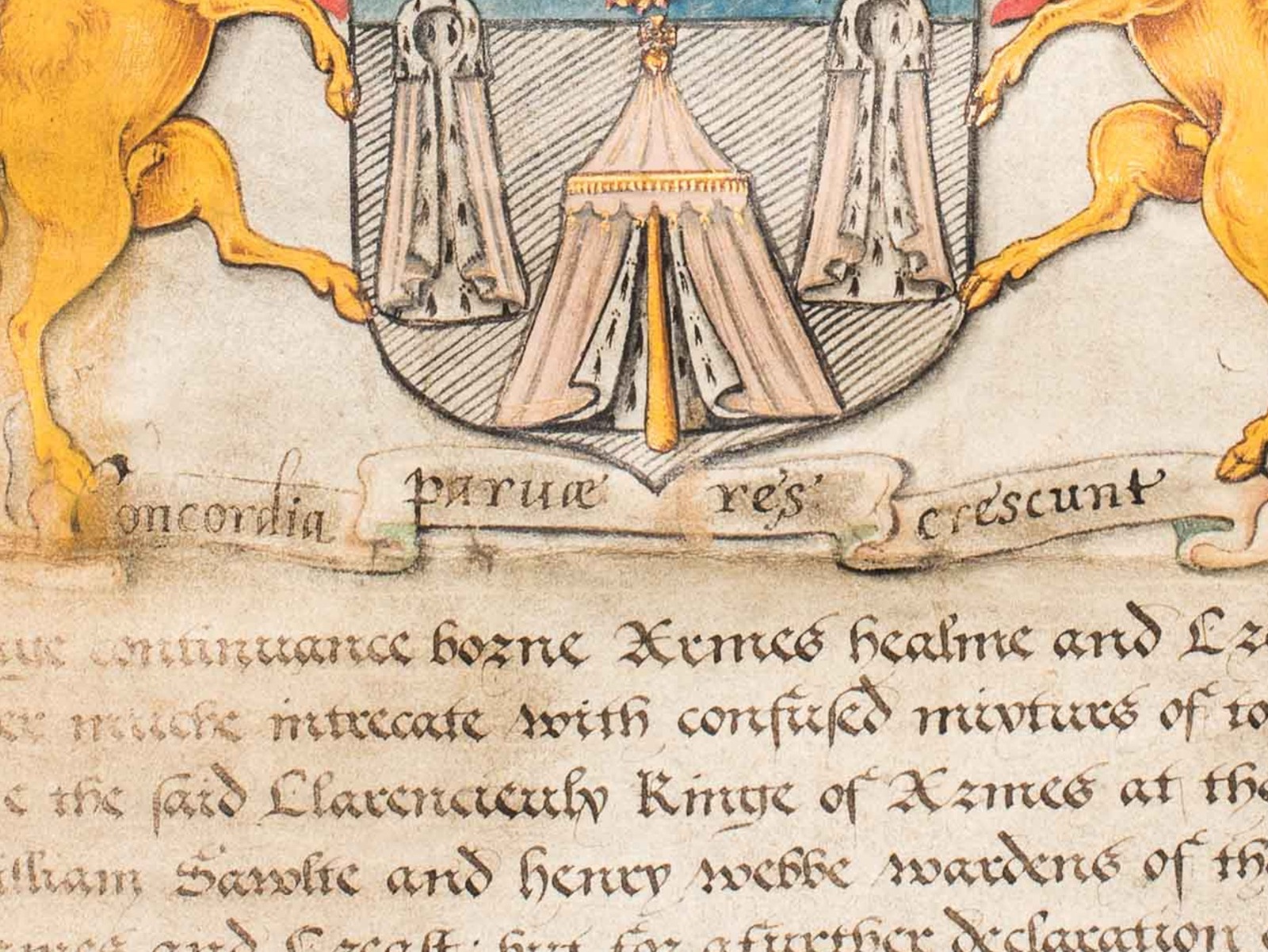 As someone who studied Classics at school and university, I ought to rank amongst those who best know the meaning and relevance of the Merchant Taylors’ Company motto, In Harmony, Small Things Grow. And yet – and I doubt I am alone in admitting this – I rarely, if ever, acknowledged its existence.

I remember the school chaplain, Revd Collingham, translating it quite loosely and colloquially as “together, little things become bigger things,” and I suppose it says something for my powers of recall that this somewhat banal description has stuck in my memory for the past 65 years or so. But, beyond that, I have never really given it a second thought. After all, the City Livery Companies were expected to have coats of arms, with a Latin motto for each, so what was so special about the words concordia parvae res crescunt emblazoned across my blazer pocket?

And so I felt until I found myself on a dreary wet day in Antwerp, visiting the Vleeshuis Museum where I faced those same words on a Ruckers harpsichord. The museum contains several harpsichords made by various members of the family, and one constructed by Andreas Ruckers, the second son of the founder of the dynasty, in 1615 caught my attention. This was in part due to its dilapidated condition – nothing from its keyboards has survived – and partly because of what was painted on the underside of the lid. Harpsichords of the period frequently were decorated with paintings of flowers, leaves and pastoral scenes or inscribed with ornate patterns and Latin mottoes. And so there, staring back at me from the lid of this harpsichord, were the words Concordia Res Parvae Crescunt Discordia Maximae Dilabuntur. 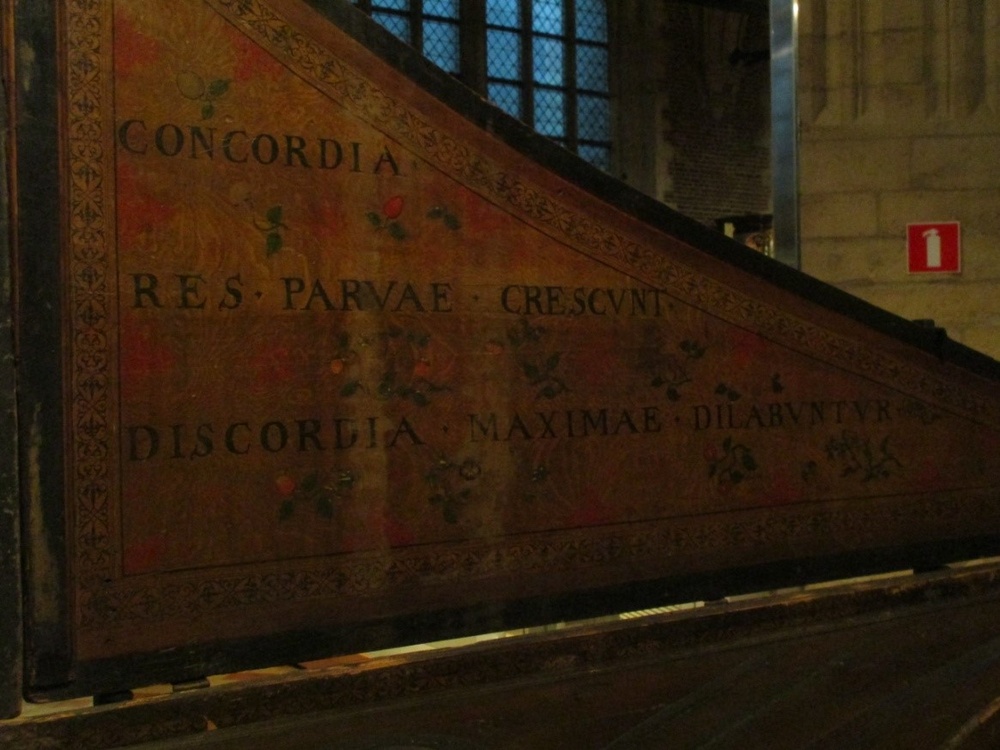 These words are in fact from The History of the Jugurthine War (Bellum Iugurthinum) by Gaius Sallustius Crispus, known as Sallust. Sallust is considered one of the great Roman writers, for his stylistic parallels to the Greek historian Thucydides, his moralistic tone and impeccable choice of words and grammar. Bellum Iugurthinum is ostensibly the history of an earlier Roman conflict against King Jugurtha of Numidia, a kingdom on the north African coast (modern-day Algeria) between 112 and 106BC. However, Sallust used Bellum Iugurthinum as a means of commenting on what he saw as the gradual destruction of Roman morality and the degeneration of politics. He was especially critical of the mismanagement of this war by a few powerful aristocrats who sacrificed the common interest of the people in favour of their own greed and political enhancement. These aristocratic senators were bribed by Jugurtha, an unscrupulous king who had already usurped the throne from his cousins, whom he later murdered, to allow him to rule through assassination, bribery and war. Repeated Roman corruption led to a shocking defeat in the Sahara Desert, where half of the Roman army was killed, before the Senate at last shook off their lethargy.

The phrase, in its entirety, comes near the beginning of the Bellum Iugurthinum, where Jugurtha’s uncle, King Micipsa, warns Jugurtha of false friends. He tells Jugurtha to seek strength from his cousins, who on account of their shared blood share loyalty and unity. He warns him that although gold and treasures may buy friendship temporarily, it will wane – as indeed his bribes to Rome eventually did. While Sallust is no doubt thickly adding the dramatic irony for entertainment's sake, the warning to Rome of its own sliding morality is clear, as is the belief that groups are stronger than individuals when they share a common purpose – as the City’s early guilds and fraternities indeed did.

Is this why the Merchant Taylors’ Company adopted part of this quotation as its motto, and why was the warning about the consequences of dissension not included? According to Stephen Freeth, the Company Archivist, the motto was incorporated for the first time in the new grant of arms by Robert Cooke, Clarenceux on 23 December 1586. This grant replaced a previous, more Papist, grant of 1481, which had included a crest of the Virgin and Child in a tent, working on the Robe without Seam. As for why this motto was chosen, Stephen doesn’t think there needs to have been a specific reason. “The educated classes were all Classicists, and Jugurtha will have been a familiar text.” Nevertheless, it could have been deemed appropriate to the Tailors (as they were until 1503) who had come more or less out of nowhere in the course of the late 15th century to become one of the Great Twelve. “Cooke could also have been impressed by the Company’s ability to come through the Reformation without too much bad feeling. The Company seems to have been rather good at including a broad range of belief within its Court, as evidenced by Sir Thomas White (a Roman Catholic) and Richard Hilles (a Protestant) sitting in the same room. But again, this is speculation.” Considering Stephen’s words, this motto could then be applied to the Merchant Taylors’ Company directly as a unifying force for its members.

The versatility of the quote, and its author’s fame, renders it unlikely that there be any direct link between the painting of Sallust’s quotation (even with two of the words reversed) on a harpsichord in Antwerp in 1615 and the motto adopted by the Merchant Taylors’ Company in 1586. In Belgium these words became the country’s own motto after the Revolution of 1830, when the nine provinces were united. It is likely a simple coincidence that Andreas Ruckers, an educated craftsman, was as familiar with the ancient classical histories as Robert Cooke, and saw Sallust’s words as entirely appropriate to the music he expected his instruments to produce, just as they later formed a foundational principle for his country: the idea of music being discordant would have been anathema to him, so how better to endorse his views than by reminding the harpsichordist that “with harmony, all is well but with discord everything falls apart,” words which still apply to many a situation today, whether musical, political or managerial.