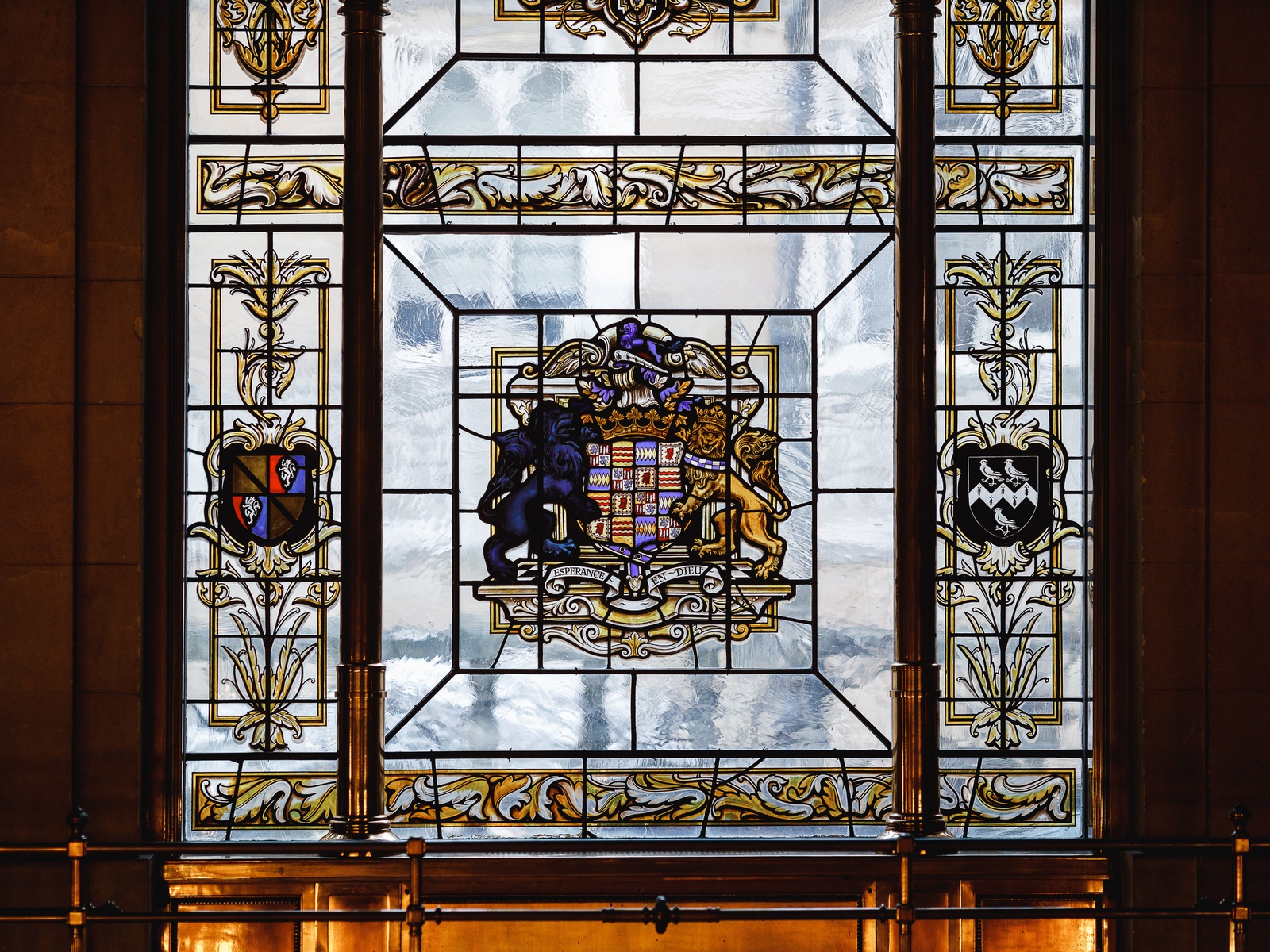 The Great Hall windows were completely renewed in 1958 after war damage from the Blitz. They show the coats of arms of prominent members of the Company from the Middle Ages onwards. For the purposes of this they are numbered from west to east (i.e. dais to kitchen) as windows 1 to 4 (south side) and 5 to 8 (north side).

Each window comprises four central panels and eight side panels. The top central panels show the arms of Honorary Freemen of the Company who were or became Kings of England. They include Edward III, who granted the Company its first charter in 1327 (Window 1) and Henry VII, who renamed the Company as “Merchant Taylors” in 1503 (Window 2.)

The second central panels show other members of the Royal family since 1814 who were Honorary Freemen.

The third and fourth central panels show principal Honorary Freemen, including those who were or became prime ministers. Among these are AJ Balfour (Window 4, panel 4 and pictured below); the Duke of Wellington and Lord Salisbury (Window 5, panels 3 and 4); Disraeli (Window 7, panel 4); and Robert Peel and Stanley Baldwin (Window 8, panels 3 and 4). There is also one of Wellington’s peninsular generals, Lord Beresford of Albuera (Window 3, panel 3), key in the Battle of Albuera during the Napoleonic Wars. 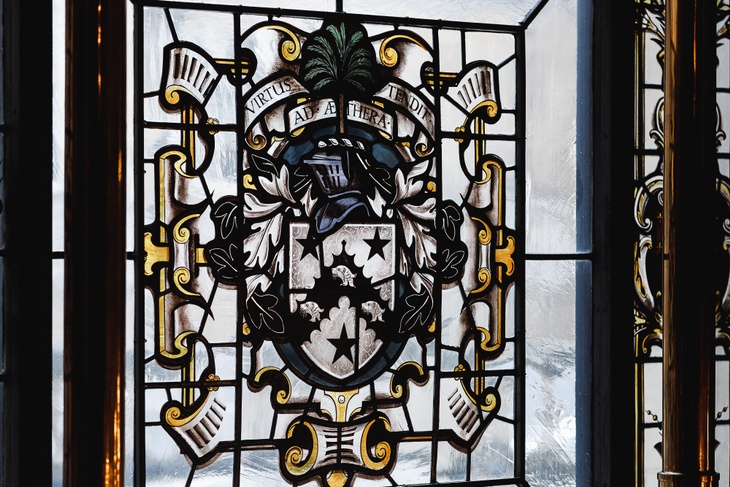 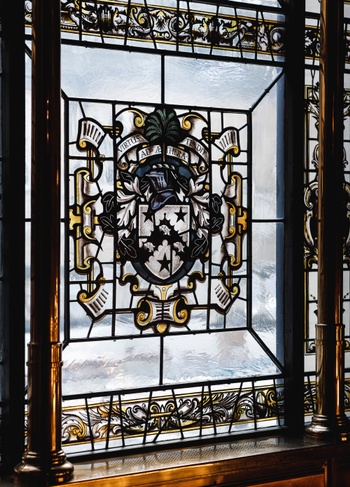 The third and fourth side panels show principal benefactors of the Company as had been shown in the pre-War windows. These include Sir Stephen Jenyns (Master 1489), founder of Wolverhampton Grammar School (Window 3, third tier, right), which still uses his coat of arms. Other principal benefactors include Walter Bigg (Master 1654), founder of Wallingford Grammar School and John Harrison, Liveryman, founder in 1619 of Merchant Taylors’ School, Crosby. 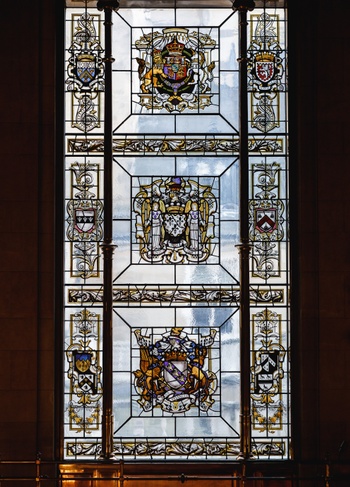 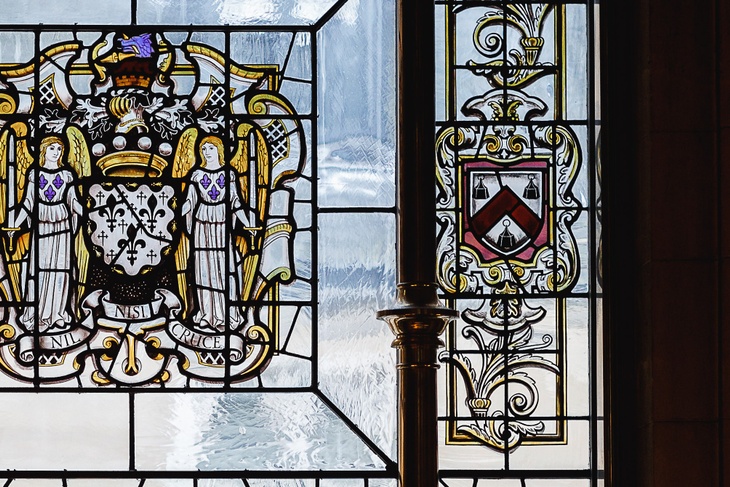 The windows’ details are best admired from the gallery, though please take great care – the railings could be a little higher!

The windows are the work of Francis Howard Spear ARCA MGP (1902-79). He was a prolific designer, responsible for stained glass in over 130 locations, including six cathedrals. He had trained at the LCC Central School of Arts and Crafts and the Royal College of Art, and used “a restrained English idiom.” Demand for replacement windows after 1945 was so great that he employed four assistants. He was also an accomplished lithographer. One of his pupils was John Piper, the artist whose tapestries can be found in the eponymous Piper Room at Grocers’ Hall.

The Company’s archives contain no design drawings for these windows. However they do include a set of record photographs of 1963, signed by Spear, which identifies every panel (now Guildhall Library MS 34352/1-3). A duplicate set of record photographs remains at the Hall. It is in book form, specially printed and bound for the Company by C Philip Smith ARCA. It includes an Introduction by the Master, James Ritchie, and an Index of the heraldry. It lives in a hidden compartment of the Great Hall woodwork.

The Great Hall was originally built in the early 14th century, and has had a succession of glazing schemes. However, the window openings on the north and south sides remain much as they were in the Middle Ages, although the windows originally came down almost to ground level. Underneath the modern panelling, medieval stonework and Tudor brick make up most of the walls as far as the ceiling.

Spear’s windows were lucky to survive the Bishopsgate bomb. On 24 April 1993 the IRA detonated one ton of home-made explosive, hidden under tarmac, in a stolen Iveco tipper truck left near the junction with Wormwood Street and Camomile Street. The blast caused huge damage to a wide area. The NatWest Tower, according to the Daily Mail, was left looking “like a mouth full of bad teeth.” Fortunately, the damage to the Great Hall windows was relatively minor and repairable. A lump of metal from the tipper truck, possibly part of a wheel arch, was found on the Great Hall carpet after the explosion and is now preserved in the Muniment Room.

Originally published in No.30 spring 2020