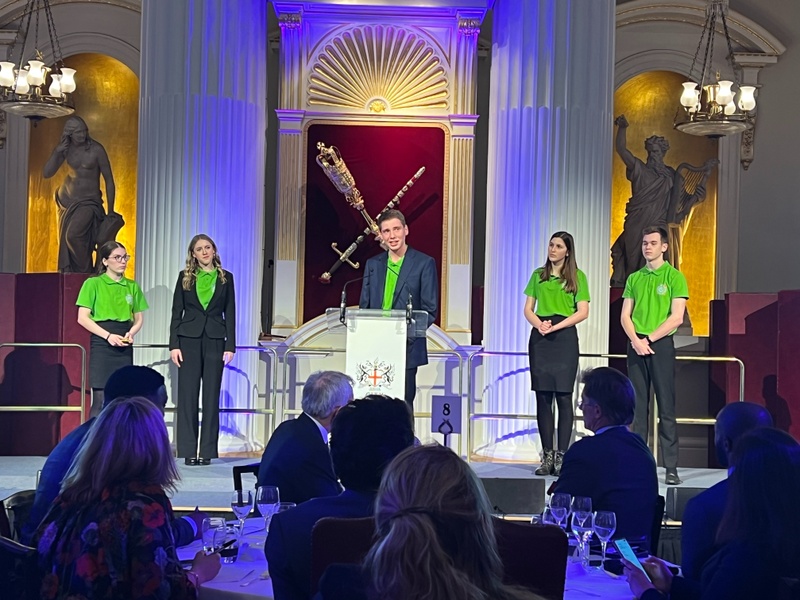 On Tuesday 1 February, we arrived at the Mansion House for a much anticipated evening. At last it was the Grand Final of the Livery Academy Awards and this would be the first-ever final we Merchant Taylors’ had a school on the stage of the Egyptian Hall.

In preparation for the event, our team Wallingford School took part in a workshop with Speakers Trust. Recommended by Freeman Victoria Price and Past Master and Court Assistant John Price, who closely support the charity, the Speakers Trust aims to support social mobility through helping young people develop public speaking and communication skills.

The night began with Sheriff and Alderman Nick Lyons (a Merchant Taylor Court Assistant), our MC for the evening, reminding the audience that the £500k investment chased by the four finalist teams, was an imaginary one; there would be no parting of hard cash tonight! The stage where he stood is the same where the Chancellor of the Exchequer delivers his ‘Manson House’ speech, and which very soon would see four teams of six 16-17 year olds presenting to an audience of more than 100 their ideas for products or services that will mitigate or ameliorate the effects of climate change.

Haberdashers’ Abraham Darby were first up. The group of six presented the G Unit, a piece of equipment which attaches to a cardio or weights machine within a gym, and generates electricity through the equipment being used. A linked app would help gym-goers track their progress as well as how much electricity they had generated. With the twin aims of saving the planet, and helping the country stay active and healthy, the team hoped to begin working with smaller, local gyms before rolling out more widely through collaborations and brand partnerships: with electricity generated; the initial up-front cost of the units would be cancelled out quickly with the electricity generated being able to be used to power the gyms. 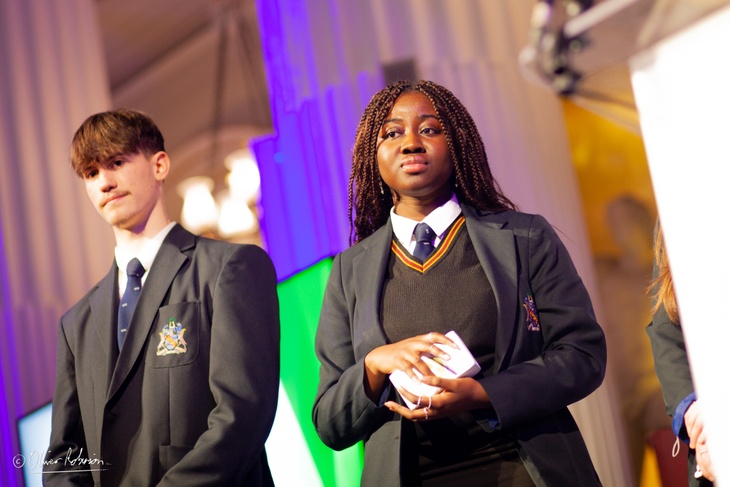 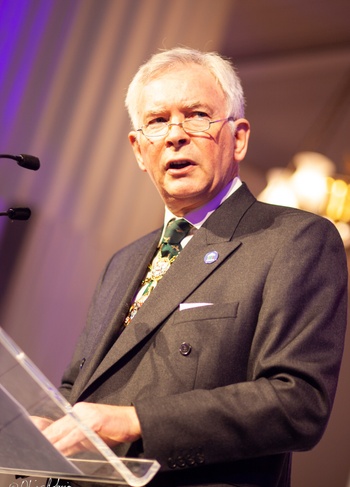 Taking questions from the judges, the team had covered their bases by factoring in increases of staffing for engineers and gym staff to be trained to maintain and occasionally fix the equipment. Altogether, this was an impressive start from our teams, and the combined effort of an app alongside a tangible product that would save businesses money, preserve our planet and help the population seemed an attractive offer.

Next up was Chelsea Academy. Associated with the Grocers’ Company who, through their Past Master Henry Colthurst, initiated this competition, the calibre of the team would no doubt be high. Naturally, they did not disappoint, and the team presented confidently, with humour and real passion. The team, known as Terra Nova (New Earth in Latin), presented their app for businesses where employees would upload their data (later anonymised) to assess the company’s overall carbon footprint. The app would include tips for employees to help them reduce their personal footprints, while the business would provide the service to businesses to help them reduce their overall Scope Three emissions effectively. As a further incentive to employees, there would be the chance to win vouchers for sustainable brands if they demonstrate that they are making improvements in reducing their carbon footprint.

The team’s confidence in presenting was replicated in their ease when answering the judges’ questions. A team of coders on hand would support businesses and their employees to ensure the app would be effective and fun to use. A particularly tough question on data processing and employee trust in their organisation using the information on them was delicately handled by the team, who explained that all processing would be in accordance with GDPR laws; data would be anonymised before companies received the information so no employee could be identified; and information stored wouldn’t be every detail, just the carbon emissions related to it. Terra Nova also promised transparency for how their app worked, assuring the judges that employees would feel very comfortable using the app. 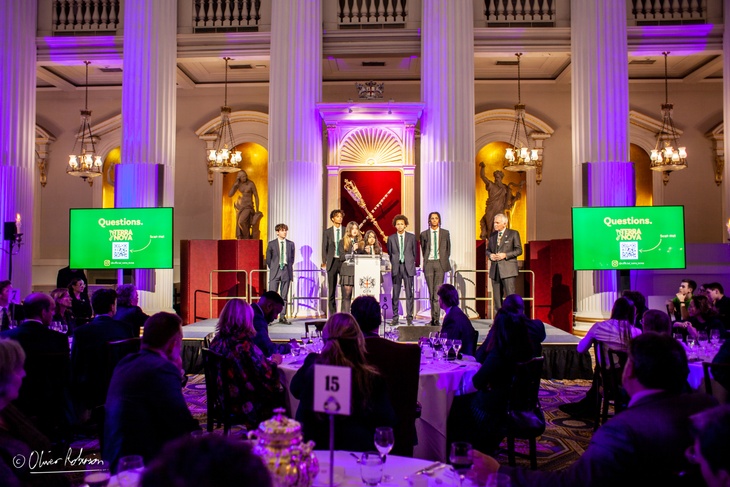 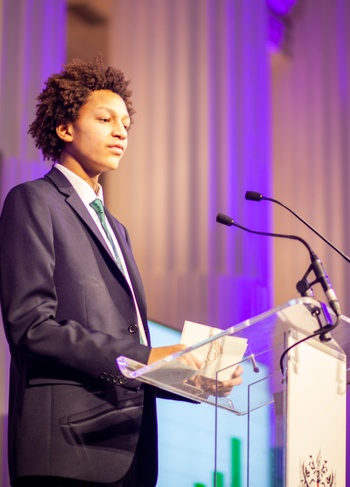 After a brief break for dinner, there was clear anticipation for the following two teams. First was Thomas Adams, a school from Shropshire, which presented the O-Pen, a biro-style pen made entirely from recovered ocean plastic. Having learnt that 1.6Bn plastic pens are thrown away each year, it followed that creating a fully sustainable option would generate immediate improvements for the environment.

The pen uses an eco-friendly ink in cartridges, which can be swapped out of the pen to further reduce the waste of each individual pen and the immediate plan was to target younger generations through viral social media campaigns to then add pressure on their parents, schools and networks to play their part; leveraging this to partner with retailers such as Tesco and Sainsbury’s.

While the cost of the pen was high (£1.25 vs a typical 80p Bic biro), once established on the market, the company would drop the price to become more competitive on the wider marketplace. Later, they would expand into wider stationery, with plans already being worked up for rulers and highlighters! 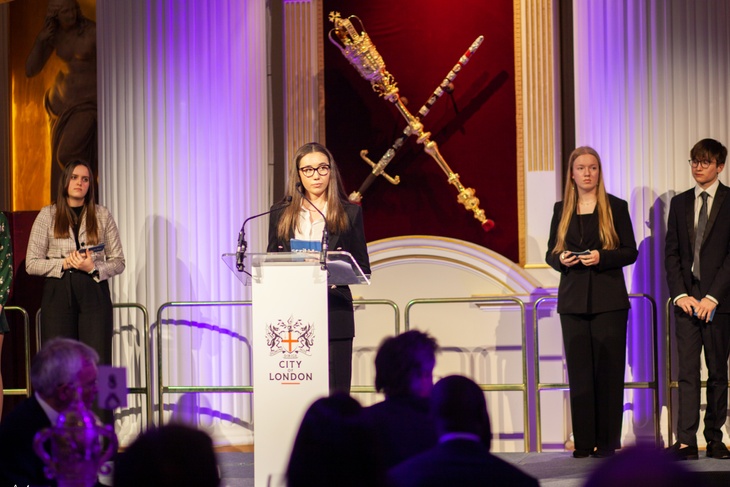 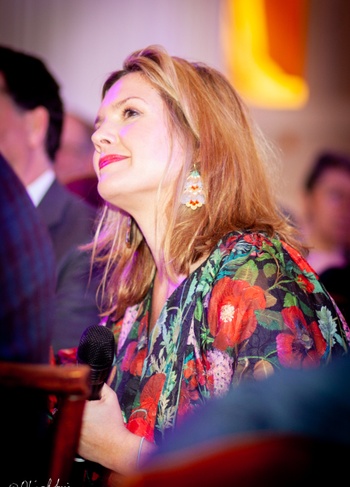 At last, Wallingford’s name was called. The team was depleted due to the Finance Director being forced into Covid isolation. However, the team didn’t just gamely carry on but put on an excellent presentation. Their pitch of a highly gamified app to chart users' carbon footprints was the result of careful research across various demographic groups and detailed analysis of competitors. Its three content areas– Home, Travel and Food – would not only track carbon use, but also make suggestions for more sustainable options. Basing their presentation in the here and now, Wallingford – or their company Carbon Conscious, should we say – highlighted the fact that their app would be needed more than ever before, with the spiralling costs of living and energy crisis worsening. The app is designed to make the process of becoming greener not only much easier for individuals of all ages and interests, but also money-efficient and fun.

In an interesting twist, Carbon Conscious outlined how as part of their development strategy they were keen to achieve B-Corp status, which is reserved for those for-profit companies that ensure the finest quality and treatment throughout their supply chains. The team left the stage to strong applause. 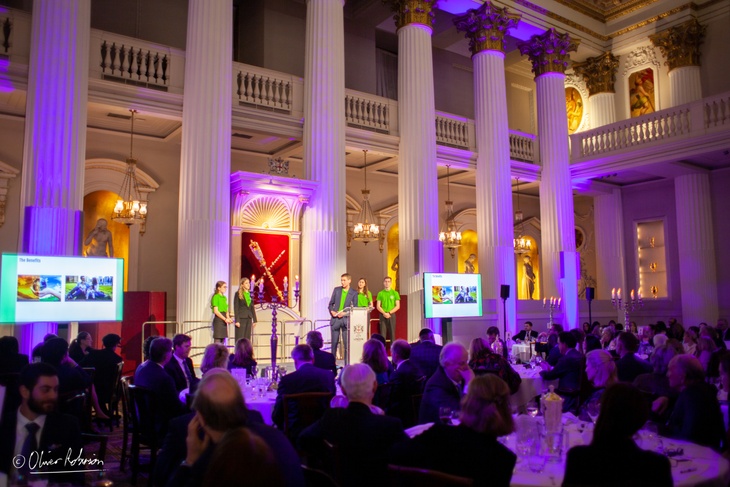 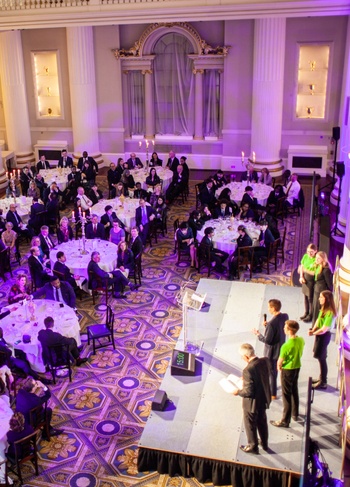 The judges bade their exit to deliberate while in came pudding and the remaining audience members were faced with the tough decision to judge the teams for themselves. Altogether, the audience would account for 20% of the final vote, which could make all the difference to the final positioning of any team.

Having overrun, the judges at last returned and the chair of judges, Tim Campbell MBE, the first winner of the UK The Apprentice, and now an advisor to Lord Sugar on the same show, added to the tense atmosphere by emphasising the difficulty the judges had had in choosing their winner in his speech. At last, the O-Pen was announced as the winner on account of its clear ability to launch to market immediately and to begin doing good right from the off by reducing, recycling and preventing more virgin plastics entering the supply chain.

Congratulations to O-Pen from Thomas Adams, the Drapers’ Company on their win, as well as to all the finalist teams. The support each school received from the network around them – teachers, mentors, Livery Company, parents and probably many more besides – also deserves a celebration. Ultimately this competition is designed to impart the importance of communication, public speaking and confidence in young people, something which every one of the teams demonstrated on Tuesday evening. Well done! 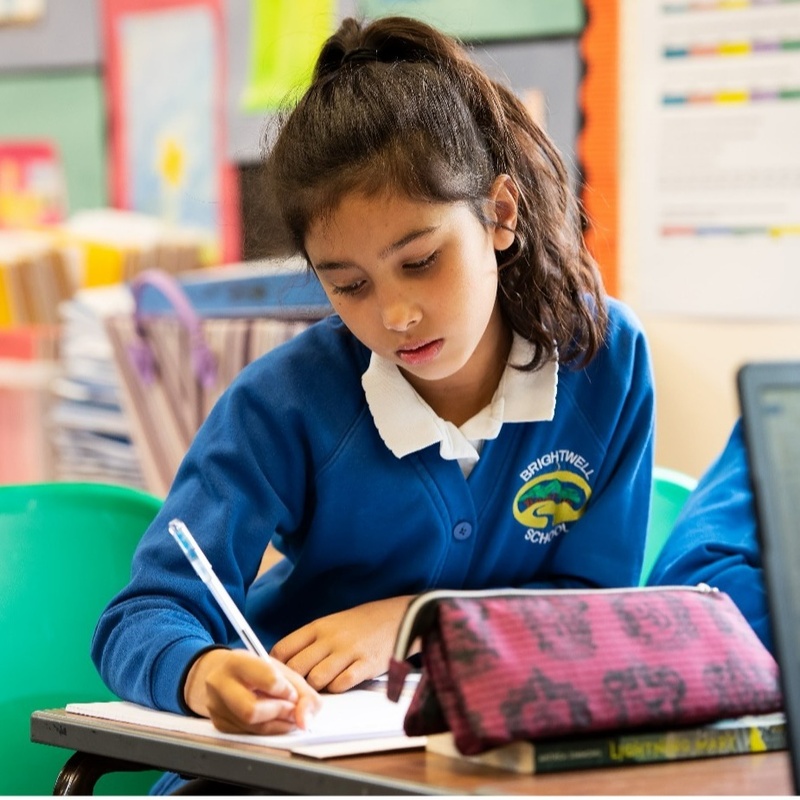 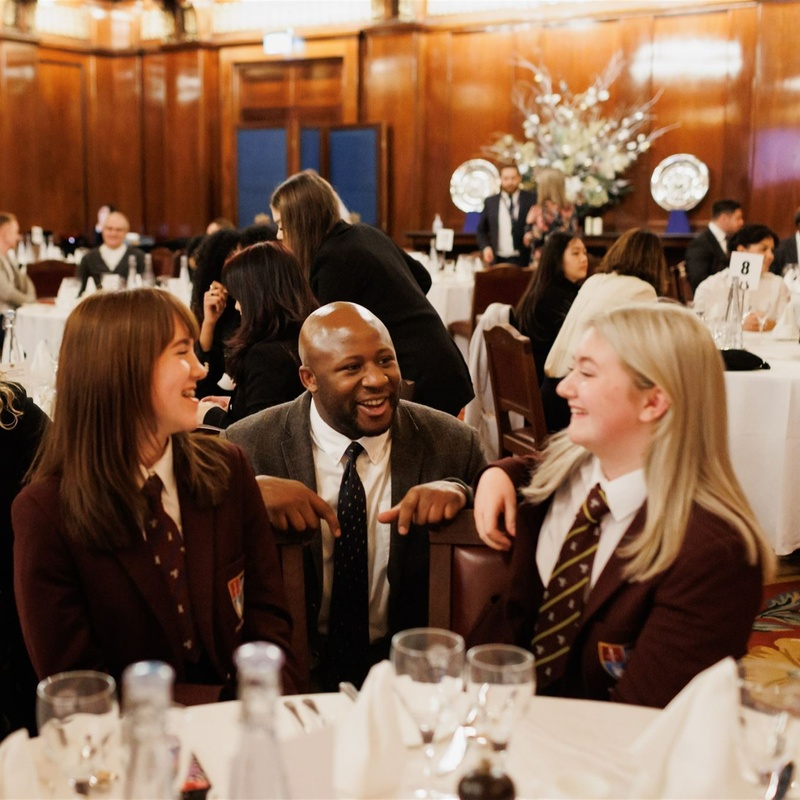 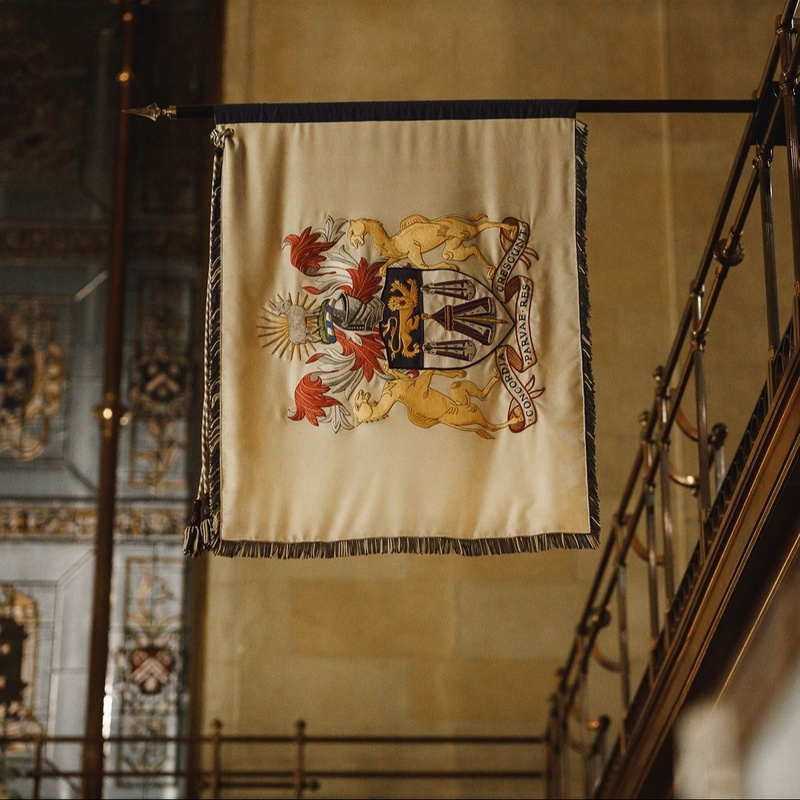 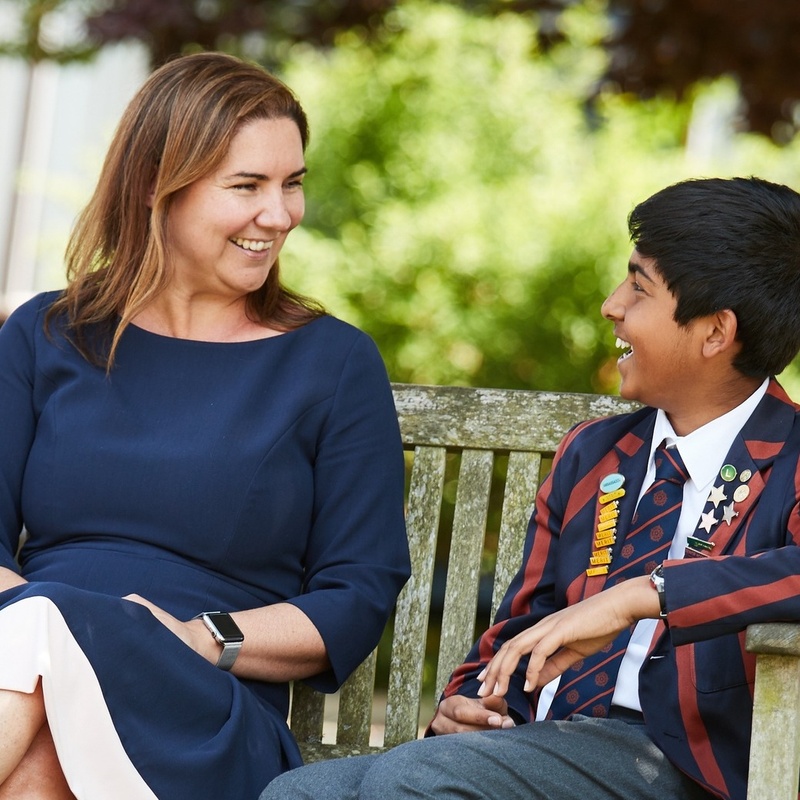