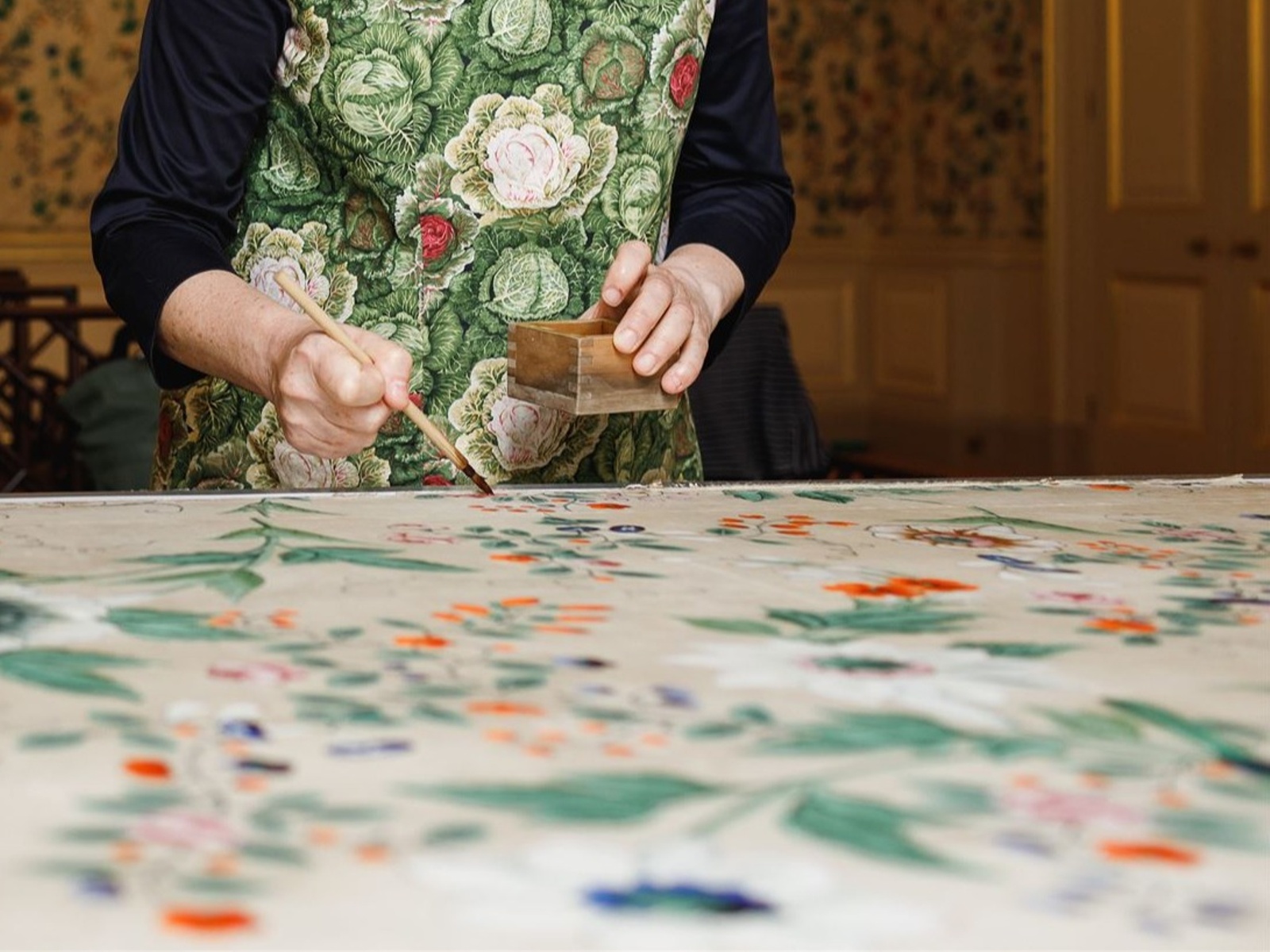 The Drawing Room is one of the Hall's most popular events spaces, especially for wedding bookings. It is unique in that its walls are completely undecorated. Instead, the 17th-century-style wallpaper is the room's decoration and focal point.

The wallpaper's purchase by the Merchant Taylors is a Company legend. Then Court Assistant and Past Master WML 'Mac' Escombe, a member of the reconstruction committee after the Hall's damage in the Second World War, heard about the upcoming auction at Sotheby's where the stunning wallpapers would be on sale and persuaded the Company to procure them.

On 31 May 1957, the winning bid for lot 90 was made by the Company Clerk, the late John Woolley, who was rumoured to be one of several Company representatives within the audience, so determined were we to acquire the stunning wallpaper!

While little is known of the wallpaper's origins before the auction, the wallpaper had never been used. The Sotheby's auction brochure said about the lot:

A superb set of Chinese painted wall hangings, comprising 46 panels of brilliant colouring on a white ground; the design with brightly-plumaged birds perched on leafy stems bearing a great variety of large and small flowers, the leaves and some of the flowers with gilt veining. Each panel approximately 12 ft high by 3 ft 10 inches wide. Chia Ch’ing [i.e. 1796-1820]. 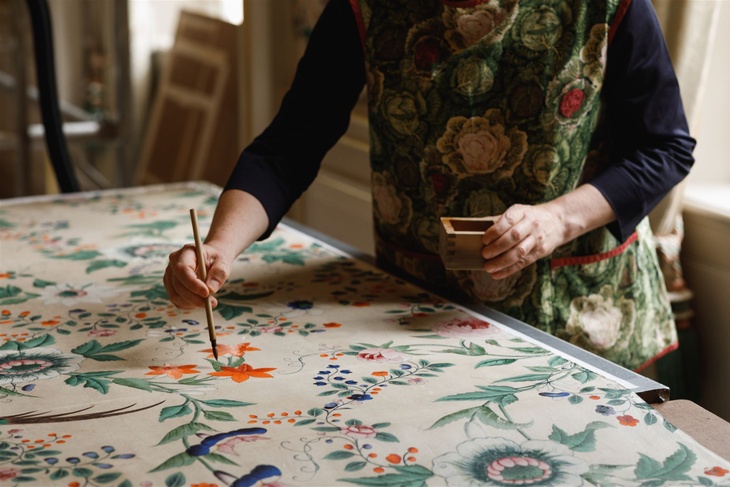 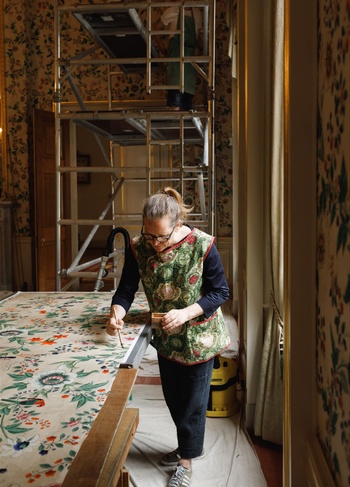 This wallpaper is Chinese in origin (the composition is a delicate layering of papers made of tan, mulberry and bamboo fibres and so is free of man-made chemicals which can quickly degrade papers), most likely part of the booming export market to Europe from the 17th to 19th centuries when the West's fascination with Eastern art and culture was at its height. Papers of this date and origin are mostly pictorial; this paper bears a repeating pattern which likely indicates a 19th century date, as it reflects the European tastes of the time. It should be noted, that while later in date, authentic wallpapers in this style are relatively rare.

In order to ensure that the wallpaper will last long into the future, the conservation process of the wallpaper is taken very seriously; the papers hang on a low-tension wooden support system rather than directly on the wall to reduce stress on the paper which would lead to tears and cracks in the paper. Humidity and changing lights within the Drawing Room also mean that every few years, the wallpapers are carefully cleaned and paint reapplied by hand to ensure the paper remains as fresh and vibrant as it always has.

Partly due to the original quality of the wallpapers made, the papers remain strong and flexible. Today they are cleaned carefully using a gentle spray and smoke sponges, latex sponges whose surface composition removes surface dirt and dust, which if not removed could cause stains. At this point any repair work can be undertaken, for water stains for example.

As fluctuations in light within the room can cause fading to parts regularly hit by sunlight or from the glow of electric lighting, acrylic gouache and water-based paints are carefully applied by hand to refresh the paper's stunning print. 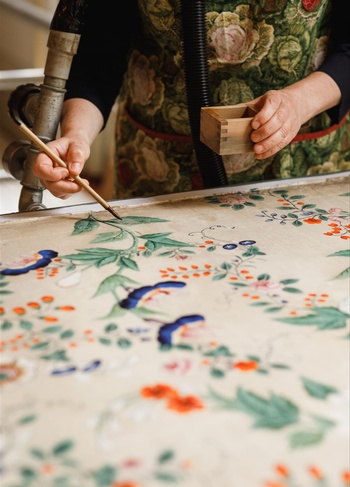 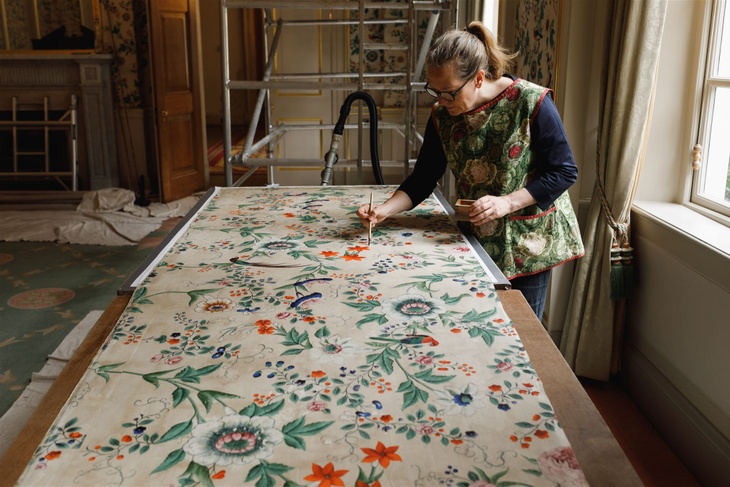 The support system on which the wallpaper hangs was redesigned several years ago to minimise the tension as the wallpaper is stretched across the frame further.

The wallpaper today is also lined with Japanese paper which is sympathetic to the particular composition of Chinese wallpapers and is lightweight as well as more flexible and stronger than European papers of the same type. In addition to the frame and the careful attention to regular cleaning the Drawing Room wallpaper will continue to delight Merchant Taylors and guests long into the future.

With thanks to Sandiford Conservation